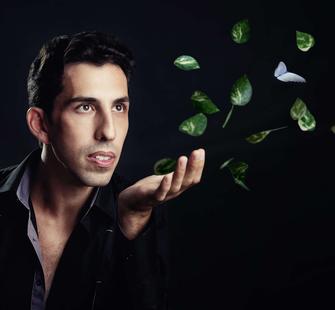 Vitaly: An Evening of Wonders

Master illusionist Vitaly has mystified fans from all over the world! From bringing pictures and drawings to life to erasing people from their own driver’s licenses, Vitaly’s signature illusions leave even the most jaded audience awestruck.

He has invented and designed every single illusion in his stage show, An Evening of Wonders, treating spectators to a theatrical entertainment not seen anywhere else in the world. Not only do they witness the elegant rendering of the impossible, they are also charmed by Vitaly’s engaging personality.

As a keen observer of human behavior, Vitaly offers a show that is about far more than magic. It goes beyond illusion to encompass the realization of our dreams and the celebration of the human spirit. With the belief that we are only limited by our own imagination, the audience will  experience the sensation that nothing is impossible.

NOTE: Recommended for ages 8 & up. Children 4 years and under will not be admitted.

Vitaly: An Evening of Wonders

Let me choose my own seats
, for
There was an unknown error while attempting to reserve your seats.
If you find this message in error, please check your reservation request and try again.
This field is required.
The amount must be greater
Please enter a number that contains a decimal (XX.XX).