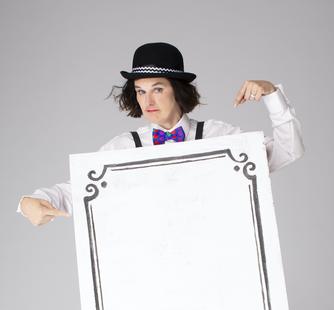 Paula Poundstone is an award-winning comedian known for her distinctive brand of spontaneous observational comedy. When she isn’t collecting hotel soaps on tour, Paula hosts the popular weekly podcast, Nobody Listens to Paula Poundstone. Nobody is a comedy field guide to life. Celebrity guests have included: Tom Hanks, Carol Burnett, Lily Tomlin, Carol Burnett, Tiffany Haddish, and Alex Trebek, who taught Paula how to be a game show host for her upcoming on-line game show, Nobody Asked You. The listeners of the show have dubbed themselves “Nobodies.” They are a loyal group, and Paula feels she has succeeded on all three counts with her goals for the show: to create a place where people felt they could go to belong, have some laughs, and learn a little something along the way.

Paula continues to enjoy being a regular panelist on NPR’s #1 show, the popular weekly news quiz Wait Wait…Don’t Tell Me! She is also an author. Her second book, The Totally Unscientific Study Of The Search For Human Happiness, was recognized as one of eight semi-finalists for the Thurber Prize for American Humor, the highest recognition of the art of humor writing in the United States. Happiness was also one of the five finalists for the AUDIE for the 2018 Audio Book of the Year.

She has achieved a long list of awards and accolades during her distinguished career. She was the first woman, in its then 73rd year, to perform standup at the White House Correspondents’ Dinner. She is the star of several HBO specials including Cats, Cops and Stuff and Goes to Harvard. Cats won the Cable ACE for ‘Best Stand-up Comedy Special,’ the first time a woman won the award. TIME Magazine listed it as one of 'The 5 Funniest Stand-Up Specials Ever.'

Paula was recently inducted into the Sirius Comedy Greats Talent Hall of Fame. She is a Board Member of the National Comedy Museum, as well as the American Library Association. Paula starred in two eponymous series – one for HBO, the other, ABC. Her live coverage of the 1992 Presidential election for The Tonight Show with Jay Leno, followed by her behind-the-scenes coverage at the EMMY Awards that same year, set the standard for those to come. She is the winner of an American Comedy Award for Best Female Standup Comic and she recently released her first (and perhaps only) rap song, “Not My Butterfinger,” a social justice song.