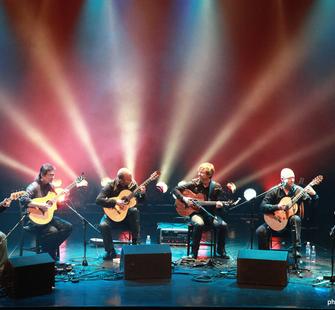 Don’t miss it when two of the hottest guitar trios in America meet on stage! Featuring six virtuoso guitarists from four countries (Japan, Canada, Belgium, and the US), California Guitar Trio (CGT) and Montreal Guitar Trio (MG3) fuse over 45 years of combined performing experience into one unique six-by-6-string “phenomensemble.”

It all started with an impromptu studio session in 2009 together in Montreal. Their musical concordance firmly established, CGT and MG3 went on to release a live recording in 2011, landing showcases at numerous arts presenter conferences, and sustaining co-bill touring throughout North America.

Come savor the sound of their original compositions and new arrangements of progressive rock, world, jazz and classical music.