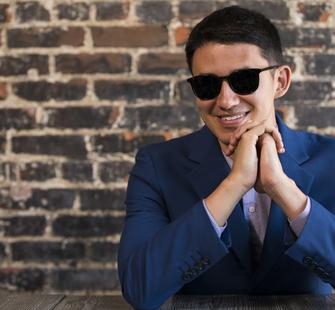 An award-winning jazz pianist and composer, Kauflin is an undeniably rare talent. His “technically brilliant and intellectually innovative” music moves critics to effusive praise and captivates audiences with its pure, sparkling joy.

After losing his sight at the age of 11, he devoted himself to the piano. He received top honors at jazz festivals across the U.S. and began performing professionally by age 15, most notably with the Jae Sinnett Trio. At age 23, Kauflin produced, composed, and performed on his first album, Introducing Justin Kauflin, and then began regularly headlining with his trio at the straight-ahead jazz club in Virginia, Havana Nights, where he also served as House Pianist. He continued to garner numerous awards such as the VSA International Young Soloist Award, was selected as a semifinalist in the Thelonious Monk Competition in 2011, and was voted “Jazz Artist of the Year” in VEER Magazine.