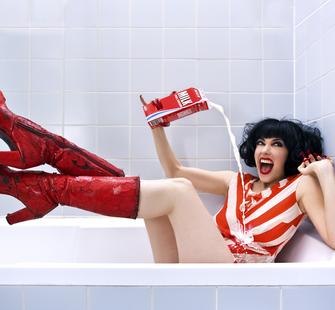 Post-post-modern chanteuse Meow Meow has hypnotized, inspired, and terrified audiences at venues such as New York’s Lincoln Center, the Berlin Philharmonic, and Her Majesty’s Theatre South Australia. Her specialties are Weimar repertoire and French chanson, all performed with heavenly vocal stylings and a devilishly witty sensibility.

Meow Meow was commissioned for David Bowie’s Highline Festival by director John Cameron Mitchell. Her piece An Audience with Meow Meow premiered at the Berkeley Rep with direction by Emma Rice and was recreated for Boston Arts Emerson, directed by Leigh Silverman and designed by Andrea Lauer.